This Thursday (25 February) we'll be using #GreenScreen. Back- projections available will be a car, beach train, woods -...
Posted by Southport MovieMakers on Saturday, 20 February 2016

Posted by Southport MovieMaker at 1:01 PM No comments:

NEW film "The Grower" in production. Topical and humourous. What is being grown? That's a mystery for now, at least. pic.twitter.com/uBU03alt8j

Posted by Southport MovieMaker at 12:35 AM No comments:

In our Club Library, we have a range of books which members may borrow to enhance their knowledge of film-making; and, potentially, their actual film production skills.

One of the books in the collection is Story: Substance, structure, style, and the principles of screenwriting  by Robert McKee. Club member, Michael Alley, below presents a review of this particular book:

Robert McKee’s work almost exclusively encompasses many TV series but no major films; yet this book and his three-day story writing course are acclaimed worldwide as the best available, and many well-known films have been written by attendees at his courses.

The book runs to over 460 pages and it could not, by any means, be considered as an easy read. It is full of examples of techniques to help one develop one’s story or progress it when one becomes ‘stuck’. The filmography of quoted examples itself runs to over 30 pages of two line entries.

“Of the total creative effort represented in a finished work, 75% or more of a writer’s labor( sic. . he is an American !) goes into designing (the ?) story. Who are these characters? What do they want? Why do they want it? How do they go about getting it? What stops them? What are the consequences?  Finding the answers to these grand questions and shaping them into (a?) story is our overwhelming creative task.”

He sets out 25 different film genres – most of us would struggle to reach anywhere near that total – then he sets out three levels of conflict which the main character , or protagonist as he calls her/him will exhibit and which we need to enunciate and understand in order to know how our protagonist will react or make decisions at various points in the story – ( heavyweight stuff , this !!) It is the gap between what the protagonist wants and the  achievement he aims for which involves the three levels of conflict. Many gaps are obvious – Lovers will meet – a detective will have suspects to identify and so on;  and so those gaps won’t surprise the audience. It is how the gaps are twisted unexpectedly which will grip the audience and carry it along .  [This is surely a pointer to the editing process – get rid of obvious things which add nothing to the story?]

McKee points out that many ‘turning points’ (see those set out by Snyder below) revolve around choices but – if we have developed our characters properly,  there really are no choices.  The choice they will make is so obvious there is no choice at all. The good guy will do the right thing and the villain won’t !   It is the dilemma of the choice which is more important – the lesser of two evils or a choice between irreconcilable goods.   Again, such points seem obvious when they are brought to our attention by an expert but are often overlooked at our amateur level as we try to write our scripts.

“William Goldman argues that the key to all story endings is to give the audience what it wants, but not the way it expects.”

Again this truism may seem obvious but when some amateur films do not always fulfil the basics of a recognisable beginning, a middle and an end; let alone the more fulfilling skeleton set out by the equally respected Blake Snyder in ‘Save the Cat’ of:
1. Opening Image
2. Theme Stated
3. Set-Up
4. Catalyst
5. Debate
6. Break into Two
7. B Story
8. Fun and Games
9. Midpoint
10. Bad Guys Close In
11. All Is Lost
12. Dark Night of the Soul
13. Break into Three
14. Finale
15. Final Image

. . .then it is sometimes difficult to believe that even an approximate structure has been followed.

The book is a good but long treatise. If you have the time it is worth reading  (I wouldn’t have the audacity to say otherwise ) but to be honest there are shorter, more concise books on the subject which may be better suited to the amateur level of expertise.

Blake Snyder's books Save the Cat! Strikes Back: More Trouble for Screenwriters to Get into ... & Out of and Save The Cat! The Last Book on Screenwriting that You'll Ever Need are also available in the Club Library.

Posted by Southport MovieMaker at 2:44 PM No comments:

Posted by Southport MovieMaker at 11:45 PM No comments:

Posted by Southport MovieMaker at 5:53 PM No comments:

Southport MovieMakers lost a dynamic and creative member with the death in February of Paul Bagshaw. The following obituary has been compiled by Club member Tony Glynn.

Paul, who was 77, was a retired art teacher and an accomplished artist in his own right. He was astonishingly active on several creative fronts. He had a wide education in art being trained at Southport College of Art and Liverpool College of Art and he held a Master's degree in Education from Cardiff University.

His teaching career began at St John Rigby RC Grammar School, Wigan, then he became Head of Art and Deputy Head at St. Richard's RC School, Skelmersdale. Latterly, he was Director of the Sixth Form at Ruffwood School, Kirkby.

As an administrator in local education, he was a governor of two primary schools and of his old school, King George the Fifth College, Southport. He was also active in the college's Old Georgians Association.

A further string to his bow was his ability in the music field. He wrote seven musicals and 230 songs, several of which were performed on radio and TV and with the Royal Liverpool Philharmonic Society.

Paul was also a prolific and entertaining author. He wrote a number of novels and a three volume autobiography.

His first ventures into filming were made with teams of his pupils and his interest expanded to become an important part of his life. I once asked him why he did not concentrate more on his own painting and he said film was now his absorbing art form.

After his school career, he set up the Channel Ten Video Company, specialising in educational programmes and expanding to cover medical and business videos and productions dealing with leisure, conference and hotel accommodation. Another venture was Artworks, producing prints of work by local artists.

His output of club and personal productions was extremely varied and highly competent. It ran the gamut from comedy to a documentary on a former Nazi death camp as well as a selection of short dramas such as "The Mirror" and "Fork in the Road", to mention only two.

He was not afraid to aim high, as in the creation of a full scale feature, "Four Days", dealing with intrigue and villainy in a family involved in business. It was the result of much effort put in by a team he gathered made up of writers, technicians and actors, some of whom were professionals or semi-professionals who happily donated their talents.

A meticulous planner, he took great pains with his productions. When producing the Club's film version of a short story by myself, "The Edge of the Storm", he not only made a scale model of the main location to facilitate action, he was virtually a one-man props department, making a series of convincing dummy rifles from some children's cricket bats; devising German army uniforms and even discovering Regan, an intimidating looking - but wholly lovable - ex-police dog, as an extra.

Paul did the Society a service by bringing in some new, enthusiastic and youthful blood in the form of a group of young people in whom he nurtured their individual talents for filming. One of them, Lewis Simpson, spoke for all of them saying "Without Paul, some of the features and short films Andy, Mickey, Sean, Nigel, myself and the rest made would not have been made or receive the amount of exposure of support they did. It was his passion and support that drove me to make more films and create something that he would enjoy and respond to. He will be missed."

A testimonial from a former member of Southport Moviemakers, Michael, read at Paul's funeral, recorded his gratitude to Paul for his encouragement and support which led to Michael winning a £5,000 film-making prize and an offer of an internship. "I don't know where I'd be right now without Paul's help", he said.

Paul who was a bachelor, was overtaken by illness quite suddenly and was working in film almost to the last, creating a series of fascinating short studies of aspects of art, that other great love of his life.

His funeral was on March 2 with Requiem Mass at the Church of Our Lady of Lourdes. Birkdale, Southport, where an eloquent eulogy on Paul's life and achievements was spoken by his old friend and teaching colleague, Brian Lewis. There was a privately attended committal at Southport Crematorium.

See a selection of Paul’s industrious contribution to the life of Southport MovieMakers. 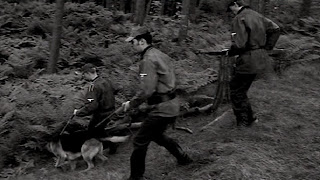 Edge of the Storm Club Production
Written by Tony Glynn and produced by Paul Bagshaw. 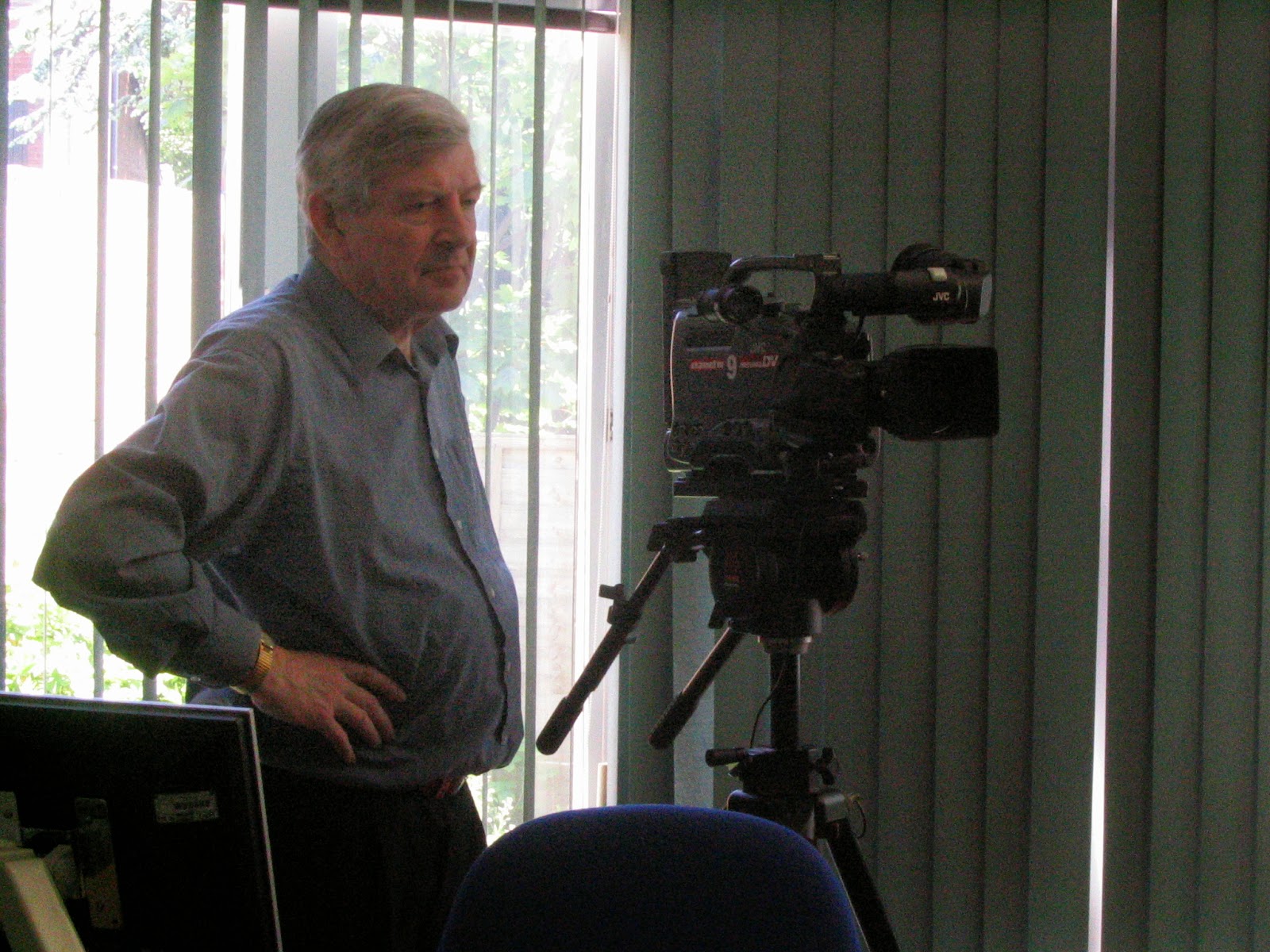 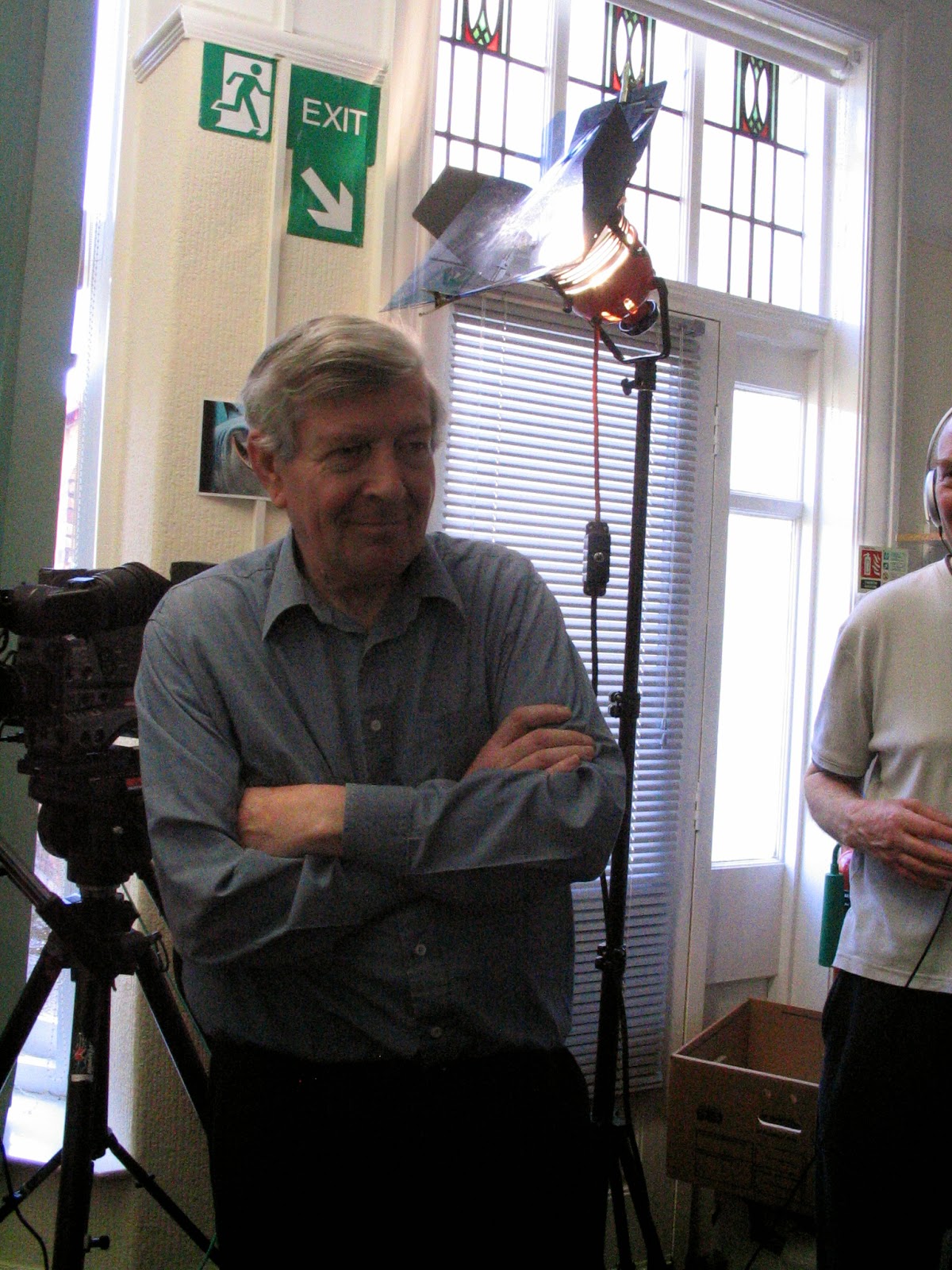 Two photographs of Paul at work on Club production "The Will"

Posted by Southport MovieMaker at 1:04 AM No comments:

Southport MovieMakers is a Club where the membership is diverse with members ranging in age from 90 to teenagers.

There is a vast range of experience of film and video production within the Club.